Literacy is a fundamental building block and the key to success in both education and work life.

Poor literacy skills are likely to stop people from achieving their full potential and can have a devastating effect on self-confidence. By helping people improve their literacy skills, you are truly changing their lives.

To produce an effective research-based literacy tool that actually works.
To be accessible to as many people as possible, including familes, without training.
To tailor fit the needs of each individual learner, so no child falls through the cracks.
The ability to be implemented in the classroom or at home.

Our philosophy is that learning should be both effective and fun.

Materials need to be visually interesting, but not cluttered or ‘childish’. Materials and methodology need to be highly structured, but easy to use and intuitive for both teachers and learners. We are passionate about the materials we develop and regard StepsWeb as ‘the specialist course which can be used by non-specialists’.

If a parent or teacher/teacher aide uses the materials correctly, they will be covering the key processing skills and knowledge effectively, even if they don’t have an in-depth knowledge of this area themselves. A specialist tutor with much greater knowledge will also be able to utilize individual StepsWeb functions effectively in a number of ways to directly support their teaching.

We also believe that, as educators, we need to move away from ‘fix them when they’re broke’. In other words, we need to stop waiting for children to fail and then focussing on intervention. Our materials are designed to enable every learner to progress at their own speed and level, with the right amount of reinforcement and specialist activities to stop dyslexic learners falling through the cracks, but also enable advanced learners to move ahead at their own pace. 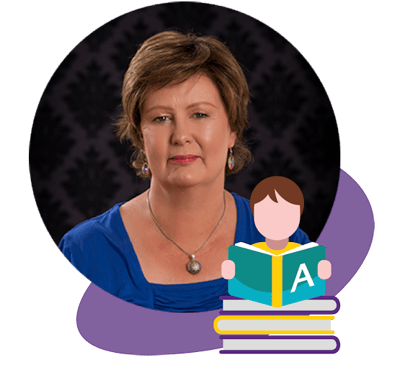 How it all began

Ros, our Founder, started her working life as a translator doing technical translations for an engineering company in Germany. Later on, she became a modern languages teacher in the UK, teaching German, French and Spanish.

When her eldest son, David, was aged seven, he was struggling with reading at school and getting thoroughly demoralised. Feedback from David’s teacher was that ‘he was doing OK and would get there in time’, but this didn’t make sense, so Ros pushed for him to have a full educational assessment. This identified that David was actually a very high functioning dyslexic.

Ros already had a very good understanding of how children learn languages, but she was now intrigued about what made it harder for some children to acquire literacy skills. To improve her understanding, Ros did further psychology training and then did the OCR Diploma in Specific Learning Disabilities, which is a Masters Level qualification in specialist teaching and assessment. Since that time, Ros has done over 3,000 full educational/cognitive assessments, including during several years as Assistant Director of the Seabrook McKenzie Centre in Christchurch. That led to her developing a particular interest in the processing and perceptual aspects behind literacy development.

During her time tutoring learners with severe needs, Ros found a lack of good resources, particularly for older learners with very low literacy skills. She created a range of hands-on game/activity resources for this group and then wrote a workbook-based literacy course. She was always interested in the possibilities of technology, with the idea that well-designed digital resources offered exciting possibilities for more varied and effective reinforcement. However, most programmes available at the time were limited or poorly designed from the educational point of view.

Luckily, in the intervening years, David had not only grown up (obviously!), but also become a talented software developer. Interestingly, this is partly because of his dyslexia, which often includes compensatory skills. In David’s case, this included exceptional spatial awareness, which makes him able to programme in ways normally only attempted by big and complex teams.

David and Ros were frustrated with some of the poorly designed ‘edutainment’ software they had seen. They both shared a passion for producing a highly effective, research-based literacy program, which would be enjoyable and easy to use with learners of any age. 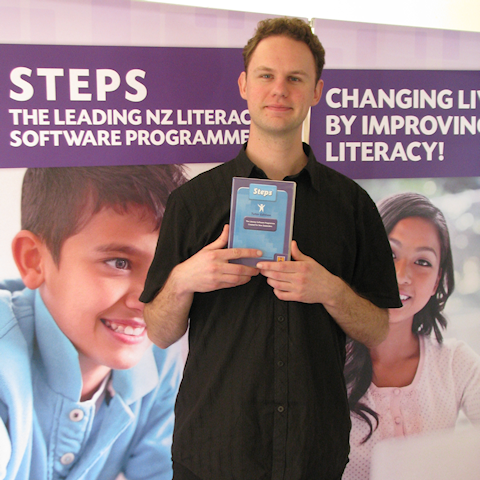 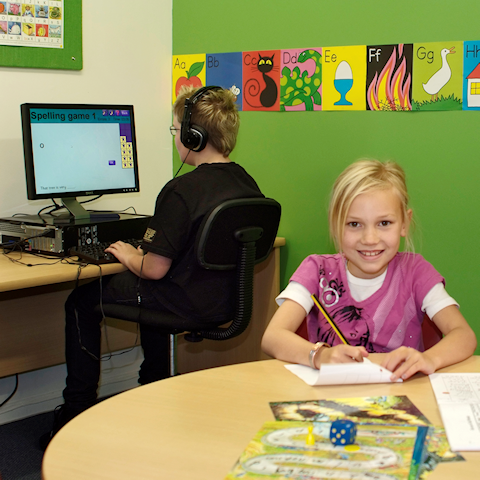 To cope with increasing demand for educational assessments and tuition, Ros opens the Step by Step Centre. It builds to having 10 staff and 130 students.

The Christchurch earthquake forces the closure of the Step by Step Centre. However, this enabled us to focus on the software programme. 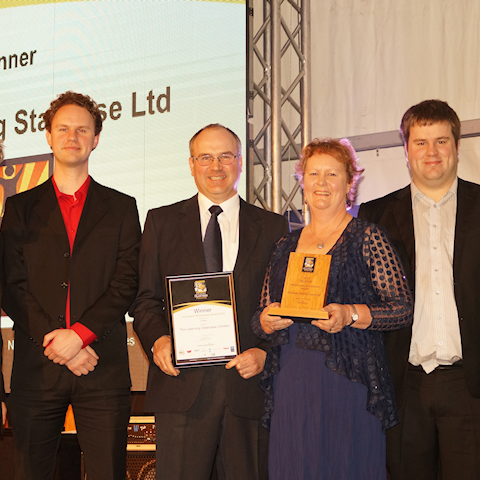 We won the Mainpower Supreme Award, which was a well appreciated boost after the hard years following the earthquake. 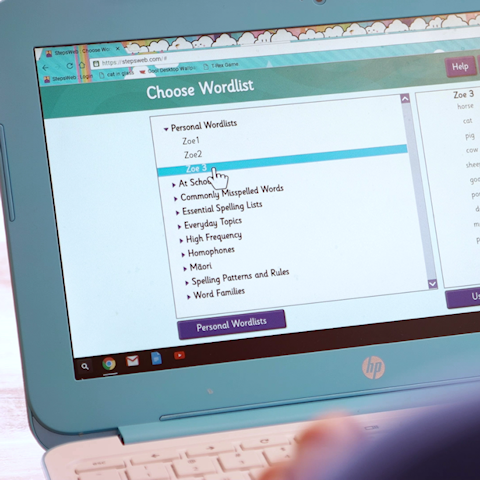 With the help of a grant from Callaghan Innovation, we created StepsWeb, the online version of Steps Network. 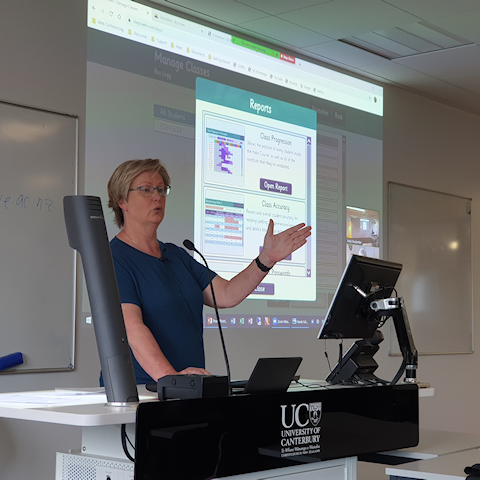 Our research in visual recognition speed, and its use to predict future ability to learn literacy, is published. A world first! StepsWeb is now being used in over 1200 schools, and it is starting to be used extensively abroad, particularly Australia, UK, Ireland, India and Dubai.

As well as providing free technical support, we also provide educational advice and guidance to both home users and schools. This can include helping to interpret educational reports and plan individual remediation, as well as working together to resolve learning challenges. In conjunction with the automatic analysis and individual reinforcement provided by StepsWeb itself, this has made StepsWeb into a uniquely powerful and versatile literacy and language tool.

We are concerned about environmental sustainability and the legacy we will leave our children. We are trying to do the small stuff like recycling and using biodegradable courier bags. We have tried to take plastic out of our resources as much as possible. On the big stuff, we are trying to reduce the amount we fly, which is primarily to run training courses. We have invested in a series of online training videos which we hope better suit teachers’ demanding work lives but also reduces the need to fly. We are running more webinars and provide bespoke PD using video conferencing (Zoom). Our passion has always been to help children and adults achieve their potential. We are first and foremost teachers and educators (and parents, of course)! We try to support the community as much as we can. We provide free software to children’s hospitals, such as Starship, where there are often children who need to continue their education during long-term stays in hospital.

We have provided free or subsidized software to charitable organisations working with a range of learners. This includes migrant and adult-literacy organisations within New Zealand and charities in Africa. We also provide free use for all non-commercial users in any of the Pacific Islands.

During the lockdowns due to Covid-19, we realised that schools were struggling with all the challenges of remote learning and we felt that this was time for everyone to pull together. So we decided the best way we could help was by providing free additional licences for the lockdown, and a period afterwards. Approximately 50,000 were taken up in each major lockdown and we were pleased to be able to help at this very challenging time.

Creating a sophisticated educational programme like StepsWeb needs highly qualified and experienced staff who passionately believe in literacy teaching. And a lot of TimTams and coffee! We also provide a selection of fresh fruit for the team in the staff room.

We need our people to be innovative, creative and have a true passion for what we do. It involves a lot of collaboration between the different specialist teams and being open about sharing ideas.

However, we believe firmly that families come first and that our people need a life outside of work. We encourage everyone to work their regular hours, take breaks and go home on time. We also strongly discourage contacting staff out of hours.